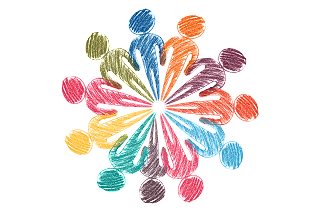 Our preconceptions of what a family 'should' look like can contribute to our difficulty making the decision to have children.  Our society is much more inclusive  of different family compositions today as opposed to 10 years ago and TV programmes like 'Modern Families'  are mainstream and popular.

Yet, change comes slowly and there is still stigma faced by those that don't conform with conventional norms. Some clients who come to me are struggling with a desire to have children with the desire to have a child in a traditional two parent family.   But you might not be in a position to have a child in your 'ideal' family situation.   You may be single or you might have a partner who definitely doesn't want children.    Or you or your partner might want children but might feel that you need to have a child that is yours biologically.  This can set up a tension within us which can feel impossible to resolve.

I love collecting first person stories of people who are creating families in a different ways.  This story recently published in the New York Times Modern Love: Four Castaways Make a Family came from a woman who always knew she wanted to adopt and whose choice didn't resonate with most of her friends.

As far as I knew, I was capable of getting pregnant. I just didn’t want to. There were half a million children in foster care in need of an adoptive parent. And I wanted children, so this made perfect sense to me.

It didn’t make perfect sense to my friends.

If your worries about having a children in an unconventional context is contributing to your struggle to decide whether to have children or not, things you can do to help include:

At the end of the process, be kind to yourself.  You might decide you don't want to have a child as a single parent, you might decide you don't want to be a foster or adoptive parent.  These are challenging options and it's ok to also say that that's just not right for you.   I've worked with coaching clients who have decided to go ahead and adopt/foster/have a child on their own and I've worked with those who decided not to.    The process of coaching allows all these clients to explore and challenge their fears.  Whatever decision is made afterwards, these clients know that they are making it with fuller awareness and are not simply being led by fears or beliefs/stereotypes.

Are you shocked by women who regret motherhood?


I hope everyone is having a good summer..... even those of you in the Southern Hemisphere where I know it's now winter.  I have a number of clients in Australia and New Zealand and I am forever having to remind myself that the seasons are reversed!

Last week, I returned to a rainy UK from my annual summer visit to my homeland of Nova Scotia. The weather there was beautiful and sunny while it has been rainy in the UK so I'm feeling very grateful that at least I have enjoyed some summer sun.

This week, I've been struck by the number of articles and writing on mothers who regret being mothers.  It's almost as if the media has just discovered that some mothers might experience a sense of loss of their identity and sense of self when they have children!  As I've mentioned elsewhere on the blog, it's a topic of concern for many of my clients.

I do find the way the debate is often framed highly problematic however. This article recently published in Australia called Anyone Shocked by Women Who Regret Motherhood Isn't Listening  made many interesting points about the structural nature of discrimination against mothers.

In the article, writer Amy Gray looks at the response to some of the recent writing on women who regret becoming mothers.

'Reaction to this [mothers who regret becoming mothers] has been mixed – a combination of recognition and personal revulsion towards the women. When we hear something veer off from society's tightly-held script, there's always an immediate emotional reaction which seeks to minimise the shock. Surely there is something wrong with these women, hushed shock that anyone could question the benign glow with which we paint motherhood.

Invariably, these women are painted as mentally ill, because people can think of no other reason they would find fault with motherhood. It must be the mother, who must have post-natal depression that has somehow lasted for 9 years or more.  It's the mothers who are judged, and not the systems that oppress them.'

As I wrote about in an earlier blog post called Regretting Motherhood, writer Rachel Cusk also talks about how the adverse reaction to her seminal book 'A Life's Work' which was one of the first books to talk about the issue of regret in mothers, was very judgemental of her.

As Amy Gray points out, the reality faced by many mothers is that they find themselves responsible for.....

'doing the majority of child rearing and home chores. You won't be paid for it, you won't be respected for it and it won't pay into your super [pension].... Not only are women expected to do this, they're expected to love it. This is despite the fact women are often unsupported and feel isolated if they don't fit the ideal picture of motherhood – the woman who can attend school meetings at 2pm, has a clean home, dotes on her children and anyone passing by. Who wouldn't be isolated by an identity that ignores who they are but continually judges what they can do for others?'

I think it's very important as a coach to help my clients challenge and disrupt these assumptions and 'norms' of what motherhood should look like.  This is because I think that what women are regretting is not having children.... but having accepted society's uncomfortable vision of motherhood.

We want to examine the 'tightly-held script' that writer Amy Gray describes, look elsewhere and see if we can create a version of motherhood that is more realistic, that is away from the ideal picture of motherhood.  If you were to do that, is becoming a mother a decision that seems more plausible and less fraught?