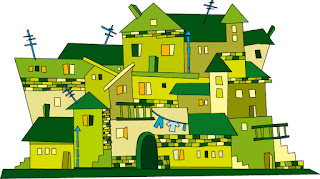 I've said on this blog before (see The Financial Cost of Having Children)  that it's rarely just money - or lack of it -  that is the prime reason for people making the decision to have children or not.   When clients come to me,  I always explore with them in the first or second session what their key fears are around having or not having children.  This is crucial to moving forward.  So often when people are feeling stuck around the decision, there are 'unspoken' or hidden fears keeping them stuck.  The very act of voicing and naming these fears to someone else can help people move forward.  But rarely have clients come to me with concerns about lack of money being the main (or most emotionally loaded) fear

But, I am now wondering if this will soon change.  In the UK and other major centers in the West such as NYC and LA,  there is a combination of factors that I believe are contributing towards economic reasons becoming more of a reason people are delaying and also deciding not to have children.   The housing crisis in London (and in other major centers such as NYC)  the cost of buying a property is now out of reach of many people.  It's difficult to find anywhere in the capital city where a flat is on the market for anything below £250,000.  In the article Young Families Priced out of the Rental Markets we can see how difficult it is for people under 30 to rent a property - never mind buy a property.

Freida who I interviewed for my book Baby or Not? was originally from New Zealand.  She explained in her interview that it was the cost of living in London which was one of the key reasons that she delayed having a child in the UK.

'I grew up in Maori culture where I was surrounded by aunties, uncles, cousins and grannies. If I was sick at school, an auntie would pick me up.I could go to my grandparents house after school.In London, I have no family. Jeffs parents live almost two hours outside of the city.Our friends are scattered all over London and few of them have children. We would be very isolated here but in New Zealand we would have lots of family and friends within five minutes reach.When I think about the quality of life we could have there, the big house, more disposable income, the support network it seems crazy to settle for a tiny flat, financial difficulties and feeling isolated.

Its difficult  it's making a choice between possible future risks and the reality of my life at the moment.The question is what is weighing most heavily now on the scales? The scales are tipping in favour of staying in London and not having a child, but in a few years the scales could tip back.Do we continue to enjoy living a life in London unencumbered by the responsibilities of being parents but live with the growing worry that we might be leaving it too late?Or do we go back to New Zealand, where we have support networks and where can actually afford to live, but give up on what we enjoy about our London lives? It's a pretty stark choice.'

Email ThisBlogThis!Share to TwitterShare to FacebookShare to Pinterest
Labels: Finance