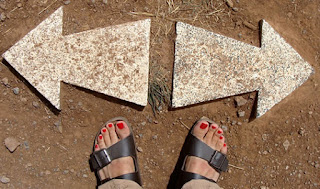 I'm a big fan of the BBC Radio 4 programme Woman's Hour and have been a listener for over 20 years.  In 2018,  I was invited on the show which was hosted by Jenni Murray and this felt like the pinnacle of my career.  (you can listen to that show here Beth Follini & Christina Odone on Women's Hour ).  I've now been invited on again when I will be discussing how women can and do make this decision and to talk about my own personal journey.

Many people have asked me what led me to coach on this specific and very niche issue.  Over the years, I've had comments from people who are very perplexed by what I do.  Usually, they have never felt stuck on the issue - they have always known that they either want children OR don't want children that they can't understand why someone would go to a coach, a stranger for help on this issue.  'If you don't know if you want a baby or not, then you definitely shouldn't have one.' is a comment I've heard several times.

But I know exactly what it is like to feel stuck in the land of indecision around whether to forge ahead and have children (or attempt to have children) or to carry on and live a child free life.

For me, my decision was complicated by the fact that I disagreed with my partner about having kids.  As he already had a grown up child from a previous relationship and was already of an age when he thought he had put all that behind him, it wasn't ideal for him to embark on the journey of having another child.

I bounced back and forth between the options for a couple years  not sure what to do.  I looked for some advice or guidance but didn't find a whole lot out there to help me.

Finally, I felt that my desire for a child outweighed many of the logical and practical reasons against. My partner came on board with the idea and we now have a 13 year old son.

At the same time, I also know that I would have had good and fulfilled life without children - it would have just been a different life.

When I started my training, I realised that coaching would be a great way to help other people who were in the same situation I had been.  Coaching helps people 'get out of their own way'.  It allows us to look at decisions and life choices in different ways than we have been.  I get people to visualise the different parts of them that are in conflict.  A classic tension is between the 'head (logic, reason) and the 'heart'.  So I encourage people to shut their eyes and visualise these two parts.  What does your head have to say? And what about your heart? What would it like to do.

I also get people to write out all their fears on a mind map - their fears and anxieties about having and not having children  And then we look at them  in the 'cold light of day' and find ways we can respond to those fears.  If they are afraid they might be lonely when they get older if they don't have children, we brainstorm things they can do that will help overcome loneliness as they age.  How do they feel about choosing not to have children when they feel more confident that they have other options to deal with potential loneliness.   If they have a fear that they might not be a good parent, I ask them to examine the veracity of that fear - is that just a belief of their inner critic or saboteur?  What happens if they imagine showing the inner critic the door... what do they believe when the inner critic isn't able to speak and wield so much power?    When clients do this, they often feel clearer about their decision and less clouded by fear.

Having coached on the issue for over 10 years now I can honestly say it is still incredibly rewarding.  Particularly when I hear from clients who have been able to move on and feel at peace with whatever decision they have made, whether it be to be child free or to have children.   I feel so privileged to have been able to have been able to walk alongside them on their journey.

Email ThisBlogThis!Share to TwitterShare to FacebookShare to Pinterest
Labels: Making the decision to have children or not, woman's hour