My Week: Interview on BBC Radio & Jennifer Aniston hits back 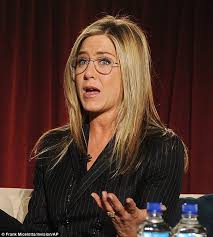 Following on from my last blog post on  women are judged for their life choices around having children or not, I was invited to speak on the BBC radio tees radio show to discuss the issue. (And the next day, Andrea Leadsom resigned - probably not in response to my radio show!)  Prior to my interview, the show featured an older woman who had decided not to have children but she felt that she was often subject to comments and felt sometimes like a second class citizen.  I concurred that judgements are still made towards women who do not have children and that unthinking comments such as those made by Leadsom are still all too common.  Leadsom has said that she did not have any malicious intent and I do believe that this is the case. But many of my clients report that friends and family members still make unthinking comments that are hurtful.  I think that we all need to challenge our own assumptions about mothers and women who are not mothers - that's the only way to start to have better conversations about the choice to have children..... or not.

This week Jennifer Aniston  also spoke out about speculation that she may be pregnant in this article for the Huffington Post For the Record   This is a particularly brilliant quote:

On Sunday, I was reminded of the power of determining our own happily ever after.  I had brunch with a friend who is in her mid 50's.  She never had children and it is a choice she is positive about. She also has good relationships with friends children.  She is aware that not having children has allowed her freedom and ability to do more with her money than she would have if she had children. Unlike the woman interviewed on the radio show, she didn't feel that she was often judged for the choice she made - but she did feel that not having children meant she would face particular challenges as she got older.  This is one of the structural issues that we have to address as a society.  As I have mentioned elsewhere in this blog on a post called Aging Without Children, assumptions that older people who go into hospital or care will have adult children to support or advocate for them are prevalent and we need to look at new paradigms which address older people's care and support.
Posted by Beth at 15:09