What is the point of raising a child? 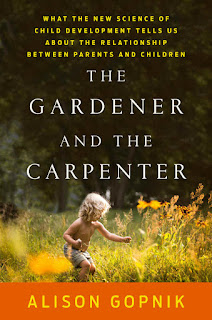 One of the reasons the decision to become a parent or not is so difficult is the different, paradoxical issues that the nature of parenting and raising children raises.

Although I think this has always been true, it's only recently that we have begun to discuss and unpick some of the paradoxes and ambivalence that go along with parenthood.  In the past,  having children and becoming a parent was just something that everyone did - it wasn't thought about or mulled over.  It was just something most people did.

A book has been published in August called the Gardener and the Carpenter.  While it is aimed at parents I think many of the key messages in the book are relevant to people trying to make the decision.  As this Guardian article by Alison Gopnik points out,  it addresses that age old question - What is the point of raising a child?

'Why is taking care of children worthwhile? It’s hard work, badly paid if paid at all, and full of uncertainty, guilt and heavy lifting. And yet, at least to most of us, it seems like an absolutely fundamental, profoundly valuable project. If you asked most parents about their deepest moral commitments, and most agonising moral dilemmas, about what gives their lives meaning, they would talk about their children. But caring for a child is very different from any other human relationship, and the standard ways of thinking about morality and meaning don’t apply very well to being a parent'.

What is very interesting and relevant to those making the 'baby decision' is that implicit in some of the arguments made in favor of having children is having children is part of making the world a more caring and nurturing place.  However, as Gopnik points out, people can be caring and loving towards their own children and at the same time be indifferent towards other people's children.   And many people who choose not to have children are caring and nurturing in other ways. In my discussion on Women's Hour a few years ago with Christine Odone, one of my arguments was that just because people who choose not to have children, it doesn't meant that they are not living values of caring and nurturing in their lives already.   Having children doesn't imbue people with a more altruistic nature - we can point to many dictators or tyrants who have had children who were still able to be callous to other people and other people's children.

Email ThisBlogThis!Share to TwitterShare to FacebookShare to Pinterest
Labels: Making the decision to have children