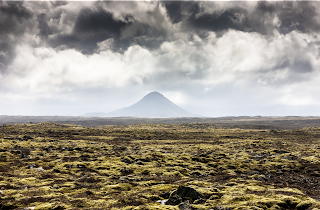 In my last post, I looked at recent reports that fewer women are not having children than a generation ago.   This research was carried out in the UK and I'm not sure if it holds true in other parts of Europe.

Iceland has higher birth rates than other European countries.  It also has a high divorce rate and many children are brought up by single parents or in step-families.

Over the last ten years, the fertility rate in Iceland has been around two children over the lifetime of each woman. In 2014, the average European fertility rate was 1.58 children per woman—lowest in Portugal, Greece and Cyprus.  In 2015, 30.1 percent of Icelandic children were born to married parents, 52 percent to cohabiting parents, and 15.3 percent to parents neither married nor in long-term relationships. By comparison, of the 28 European Union countries, around 40 percent of children were born out of wedlock. After Iceland, the second-least-likely countries for children to be born to married parents were Bulgaria (58.3 percent), Slovenia (58.3 percent) and Sweden (54.6 percent).  At the other end of the scale, only 2.8 percent of Turkish children were born to unmarried parents and 8.2 percent of Greek children.  From the website Icelandic Review

Yet in Iceland, this is not a cause of stigma or disapproval.    Interestingly, Iceland also has a high rate of happiness and well-being.

In this fascinating article on Iceland and what makes Icelanders so happy, John Carlin came to the conclusion that one of the main reasons was the acceptance of different forms of family AND a high level of governmental support for family through good parental leave, childcare and schooling.

When a child's birthday comes around, not only do the various sets of parents turn up for the party, the various sets of grandparents - and whole longboats of uncles and aunts - come too. Iceland, lodged in the middle of the North Atlantic with Greenland as its nearest neighbour, was too far from the remit of any but the more zealously obstinate of the medieval Christian missionaries. It is a largely pagan country, as the natives like to see it, unburdened by the taboos that generate so much distress elsewhere.

So it would seem that is the decision to have children as much less stressful and fraught than it is elsewhere.   I'm sure that there still are women in Iceland who are struggling but it appears that without the worry and stress of judgement coupled with generous government support makes it much more acceptable for women to have children in a range of different situations.

If you were free of all society expectations of how you should have children and what your family should look like, would you find the decision easier?

Email ThisBlogThis!Share to TwitterShare to FacebookShare to Pinterest
Labels: Iceland, Making the decision to children